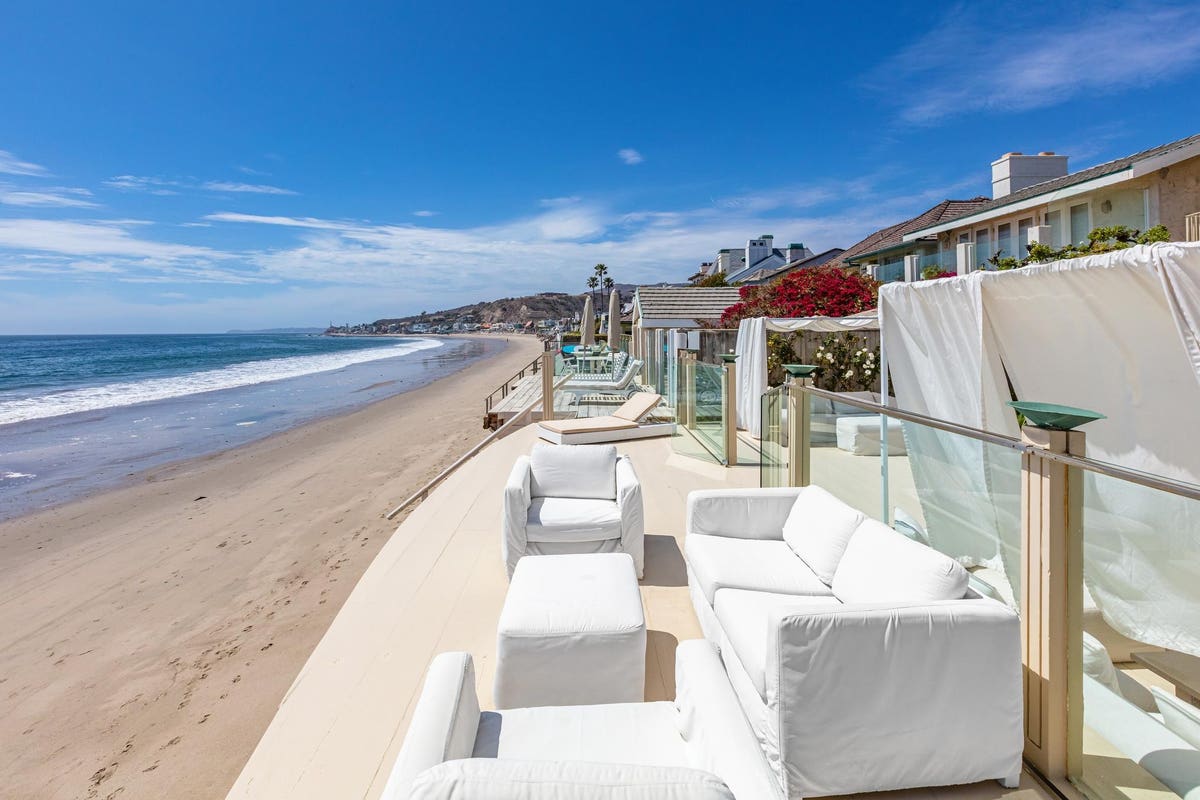 Malibu’s market madness from a year ago has continued at the same frenetic pace, setting the stage for a hot summer market that shows no signs of cooling down. Among the hottest spots in town? Malibu Colony, an exclusive guard-gated community of about 76 beach-side homes where there’s a chance your neighbor is an A-list celebrity or a member of the Wall Street elite.

Hilton & Hyland’s Chad Rogers, arguably one of Malibu’s top real estate agents, grew up in Malibu Colony. In his 20 years of selling Malibu, he has never seen a market like this. “The activity is insane. I feel like I’ve been riding a real estate tidal wave. Buyers are chomping at the bit for listings to make offers on,” Rogers explains. Sounds like the perfect wave.

Here’s what $25 million or more will buy you in Malibu Colony today. This Italian-vibe beachfront villa, called La Luce della Luna (or The Light of the Moon), is listed at $25 million. It’s a 3,566-square-foot home complete with an ocean-view rooftop, an outdoor fireplace and unending coastal views.

Measuring more than 5,000 square feet is a “mid-century land-side [to] ocean-side compound” priced at $29 million. The property and its roughly 55 feet of prized beach frontage recently went under contract, according to Rogers, who has the listing.

With clients already on a waiting list to buy in Malibu Colony, it looks to be a very busy summer for Rogers. For those looking for summer rentals in the Colony, expect to pay (if you can find one) upwards of $300,000 for the months of July or August. Malibu’s rental season extended into Fall and beyond last year. “I saw high-net-worth renters who didn’t want to leave [Malibu Colony] become buyers,” Rogers said.

Rogers currently has all the listings in Malibu Colony. “I am the MLS of Malibu Colony,” he laughs.  One look at Rogers’ sales since March 2020 confirms this. All six properties listed, sold or registered as ‘active contract, the latter meaning there is a sale pending, were either listed or sold by the luxury real estate specialist. On two of the properties, he represented both buyer and seller. On the other four sales, he was on one side of the deal or the other.

Who are those buyers shelling out cash for eight-figure Malibu properties these days? “There are families with multi-trophy homes who want a place in Malibu. I also see buyers who are downsizing from big homes in Beverly Hills and want the peace and quiet of Malibu,” Rogers observes.

Living your best life in Malibu is a thing buyers will happily pay multi-millions to obtain. From dodging paparazzi while you grab your morning brew at Malibu Village on Cross Creek Road to a low-calorie dessert at Malibu Yogurt, Malibu is just different. Celebrities in sweats, no make-up, and flip flops or UGGs (depending on the season) blend in with the city’s 12,000-plus residents. It’s the beach minus the glitz of the Hamptons. Of course, there is Nobu Malibu on PCH with its share of sushi eating patrons from George and Amal Clooney to Angelina Jolie and Leonardo DiCaprio.

Malibu is Malibu, and can’t be replicated—the ZIP code of 90265 will always be in demand.

Five Steps To Make Your Best Offer In An Exploding Housing Market
Shopping center CEO says foot traffic is back to pre-Covid levels as retail evolves
Inside Manhattan’s Co-Op Market: Where Prices Are Rising Amid Easing Covid Restrictions
SDIRA Real Estate Investing Part 3: Don’t Make These Mistakes
Here’s everything you need to know about applying for federal rental assistance