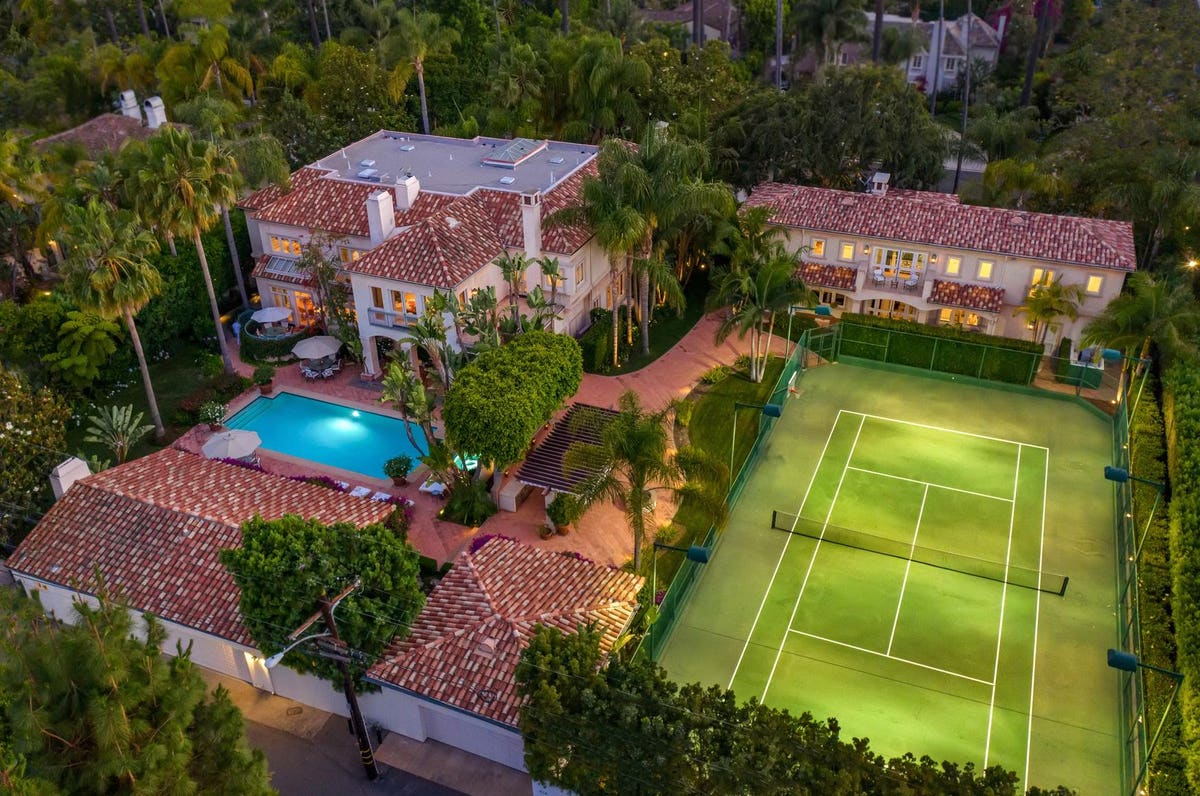 It’s not every day that a prime piece of Beverly Hills becomes available, making this $33-million estate something of a rarity in today’s market.

Spread across two side-by-side lots in the Flats section, the two-house compound with a tennis court is about as choice as it gets, according to listing agent Jonathan Nash with Beverly Hills-based Hilton & Hyland. “When it comes to property in the Flats of Beverly Hills, it’s very rare to find one with two legal lots that combine for an acre. It’s a unique offering; there are very few properties with this kind of land south of Sunset Boulevard.”

It’s not just land alone that makes this a world-class compound. The property comes with two luxury homes that combine to offer 10 bedrooms, 14 bathrooms and more than 13,000 square feet of sophisticated living space. The main residence, designed in Mediterranean style, includes a soaring skylight-topped entry, grand living spaces, and an office/study. The guest house, modeled after the main residence, displays a designer touch with elegant contemporary finishes—a characteristic shared by the pool house on the property.

Outdoor amenities also run the gamut. In addition to manicured grounds, the estate features a resort-style swimming pool with a cascading waterfall and a pool-side misting system. An outdoor kitchen sits near the pool and is paired with a dining pavilion. Then there’s the floodlight-lit tennis court, which is a highly coveted feature among specific buyers. “Particularly in Beverly Hills, where the laws have changed in terms of what you can build, a tennis court like this is very rare—and it’s something buyers will pay a premium for,” Nash notes.

Nash, who tallied more than $1 billion in total sales during his career, speaks to the urgency he’s seeing in today’s luxury marketplace. “There’s still incredible demand for great homes. Many Los Angeles residents are looking to upsize or grow their estates, and we still see a lot of migration from San Francisco, New York and other domestic hubs,” he says.

Once international travel restrictions are further loosened, Nash believes Los Angeles’ luxury market will only continue to grow. “This is a lifestyle that is hard to replicate. Los Angeles has become the center for entertainment and commerce, and I think we’ll see that reflected in the market for years to come.”

Recent sales support Nash’s outlook. So far in 2021, there have been seven sales north of $40 million, including a high of $61.5 million set in May when late business magnate Barron Hilton’s estate traded hands. Other notable sales include Eli Broad’s artful residence in Malibu, which caught a buyer at $51.65 million, and the sale of Shane Smith’s Pacific Palisades retreat for a neighborhood-record $48.67 million, according to The Los Angeles Times.

The Difference Between Waivers And Consents In A Ground Lease
Mohamed Hadid Reduces Price For Los Angeles Land And NFT By $50 Million
How To Decide Where To Invest In Real Estate: The Breakdown
Evergrande collapse could have a ‘domino effect’ on China’s property sector, AllianceBernstein says
China likely won’t bail out Evergrande directly unless there’s ‘far-reaching contagion,’ S&P says