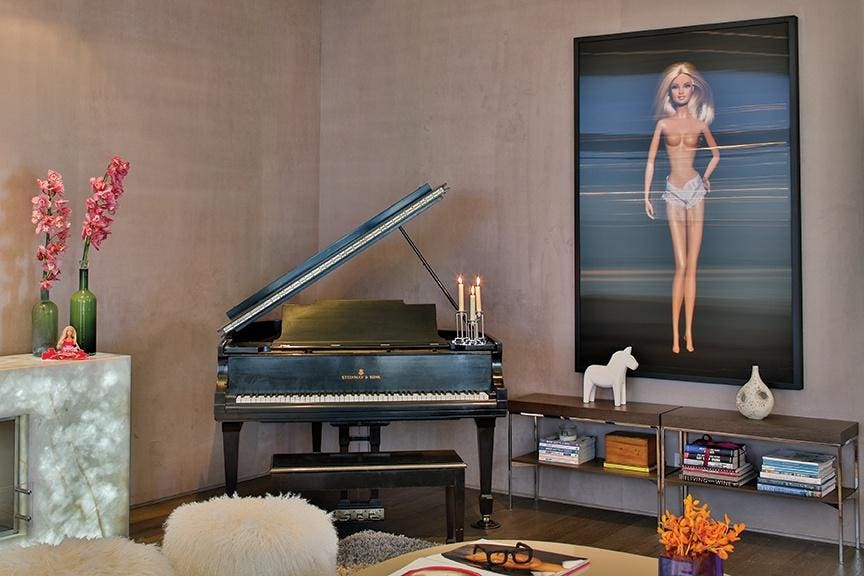 Barbie fans may be all shook up over Mattel’s new female Elvis Presley collectible doll. Still, purists can immerse themselves in a classic by enjoying a tour of the real Barbie penthouse, which hit the market for $10 million Tuesday.

The 3,200-square-foot Century City residence, formally owned by Mattel founders, toymakers Ruth and Elliot Handler, was purchased for $3 million by developer and designer Nicole Sassaman in 2012.

“Technically, I bought the home from the real Barbie, Barbara [Handler Segal],” Sassaman says of the penthouse. “Ruth and Elliot passed away. Her brother, Kenneth, was deceased as well. So everything was left to Barbara. But don’t call her ‘Barbie.’ If you call her ‘Barbie,’ she will correct you and say, ‘It’s Barbara.’ She is a lovely woman. But few people know that Ken and Barbie were the inspiration behind the iconic dolls,” she says. Barbie was introduced at the annual New York toy fair in March 1959. Ken was added in 1961.

Sassaman says the original penthouse didn’t have a feel specific to Mattel. “It felt like a 1960s time warp. The only thing in the home related to Barbie was the Barbie and Ken dolls in a glass case. I only wish that I had asked Barbara for them, but I didn’t have the heart,” she says.

Sassaman tore out all the electricity, the plumbing and the framing and the windows. “We came down to nothing,” she says. “The whole place was one room. We started all over again.”

Over her career, Sassaman has flipped about 60 properties since she bought her first one-bedroom apartment in 1997. Buying and selling the Greta Garbo estate helped her when designing the Barbie penthouse.

“One of my favorite properties that I flipped was a house that quite a few celebrities lived in, including Greta Garbo and Gloria Vanderbilt and Tab Hunter. The house got a lot of press, but when I sold it, the people largely bought it because Greta Garbo had lived there; it was called the Greta Garbo estate. And I thought, ‘Wow.’ If I ever buy a house or a property where someone famous has lived, I will pay respect to the iconic aspect and document everything from the beginning. So I took this approach with the Barbie penthouse. Also, I never got to redesign a penthouse, so this was such a fun opportunity to do something on a different scale,” she explains.

Sassaman says, the kitchen is one of the absolute biggest wows for visitors. “The de Giulio kitchen has was custom-made for me. The crystal quartz island has a backsplash made of Calcutta marble that slides to reveal a spice rack. It’s unique, and I spared no expense. As a result, it is one of the most photographed kitchens in the world,” she says.

With views of the Griffith Observatory, the Pacific Ocean and the Hollywood sign, the home offers a sense of the unexpected. The custom wine cellar holds 300 bottles.

“Every room you go into has something unexpected, whether it’s the library shelves that are actually a secret door or the little room with a loft,” Sassaman says. “The penthouse has a lot of interesting things you don’t see every day.”

The three-bedroom, three-and-a-half bathroom Los Angeles condominium has an office that has a queen-sized bed in the loft and a balcony with 350 square feet. The main bedroom has a bathroom, a walk-in closet, an office and a private terrace.

While the 3,300-square-foot penthouse sits on the 28th floor, Sassaman, who owns a Los Angeles store, says people stop by her shop to ask about the Barbie penthouse. “I am always so touched by the relationship people have with Barbie,” she continues. “Some people are in tears. Barbie had such an affect their life, and it is just so cool to see that.”

Sassaman says it is not surprising that she would design Barbie’s penthouse. “Of course, I had Barbie’s when I was a little girl. I loved Barbie. But the most fun thing for me when I was a child was building and designing Barbie’s houses,” she says.

Sassaman says the feedback from the real Barbie had a major impact.

“Barbara came to the first party we had when La Cornue wanted to show off the stove they made for me. She was so blown away that she wrote me the nicest letter saying how much she liked the home and said her parents would have loved what I did to it. She allowed us to put that note in the front of my self-published ‘Barbie Penthouse’ book,” she says.

Why sell now? “When I finished the penthouse in the early days, I was offered $10 million from quite a famous hotelier. It was a terrific offer. But I just wasn’t ready to sell at that time. If I don’t sell it, I get to continue to live here. And all my friends are dying that I’m selling. But I just thought it was a good time to let go and a great lesson to teach my 15-year-old daughter not to get too attached to things. Nothing lasts forever, and it is good to move on and try something new, not get stuck in a certain thing in one place. Also, it’s important to share this home. It’s a beautiful place. I have created so many amazing memories here. Even last night, all my friends were over. Everyone wants to celebrate here as long as we have it, so it seems like every night is a party. But I think it’s time to pass the torch and let someone else enjoy it,” she says.

For her next move, Sassaman and her husband and there daughter are going where the road takes them. “I have bought another penthouse in the area that I might move into, but I’m not certain. Of course, that’s a good problem to have. I used to live in the Hollywood hills and miss the privacy of living in a home,” she says.

Given its L.A. location, many people understandably confuse the Barbie penthouse with the famed Barbie beach house in Malibu. Still listing agent Scott Segall with Douglas Elliman in Beverly Hills says, “Apparently, Barbie had a lot of residences. But the Malibu Barbie is a completely different Barbie from the penthouse Barbie. Not that I’m an expert on Barbie trivia,” he says, laughing. Moreover, he believes her Dream House is still sold separately.

Segall, who has been selling real estate for 20 years and is listing the property with Carrie Berkman Lewis, says the penthouse is one of a kind. “There is nothing like it. It’s head and shoulders above anything that I’ve seen. It has the best views in Los Angeles,” he adds.

“I love the kitchen. Visually, it is just stunning. My other favorite thing is that many units in the building don’t have outdoor space, and this has the most amazing terrace. It’s deep and it’s usable and has views all the way to downtown that are unobstructed, Segall says.

“This penthouse is a little more understated and low-key, so it’s not in your face. And I think a lot of people with high profiles love that. Beyond that, the history of having the Handlers who invented Ken and Barbie having lived there gives it some sort of cache. Nicole has completely reimagined the space. And I think it’s always fun when you have some kind of history associated with a remarkable property,” he adds.

“If you’re going to buy your daughter a Barbie Penthouse, and that Barbie Penthouse was a toy, it would look like this,” Seagall says. “It’s the live version of what Barbie would have had. There’s always been this idea that Barbie likes the finer things in life and we are delivering that.”

Five Factors That Still Drive Proptech After A Decade Of Explosive Growth
Should You Ride The Wave? What’s Going On With Home Prices
What About $8 Million Buys In Real Estate Around The World
Mortgage market is unprepared for climate risk, says industry report
The Evergrande crisis may just be a ‘tempest in a teapot,’ says analyst